This post is part personal reflection on my own year and part musing on the perils of New Year’s Resolutions. Thanks for being here to start 2016 with me and do let me know your thoughts.

January 1st 2016, a day when half the country is hungover and the other half has already packed into gyms starting their ill fated, but well intentioned New Year’s resolutions.

I have mixed feelings on New Year in general. I think it’s good to have a time of the year where you can sit back, reflect and have a self ‘MOT’; see how you’re doing, what didn’t go so well and how you could do it differently next time. I even agree that the odd ‘blow out’ is good. If you’re anything like me when you’re hungover you feel massively sorry for yourself and try and plan how life can be better.

What I don’t agree with is the New Year’s resolution thing: I’m going to change a thing on this date. It just doesn’t (usually) work. More often than not people choose some sort of massive lifestyle change that starts from Jan 1st, and by Feb 1st, the change is lining the waste paper basket along with the ‘promise’ that you’ll spend more time with your family, or get up in time for work.

This is because of two things:

This is a well documented fact. I’ve written about this is several publications. But without reading all the bumph you know it to be true in your heart of hearts.

If someone wants to, and I mean really wants to, make a massive lifestyle change, it needs to be in small, bite size chunks that don’t seem to require a massive effort.

Over time, if you make small changes, the result will be a sustainable lifestyle shift, plus you’ll feel awesome when you do achieve it.

‘I’m going to start exercising on Jan 1st’ leads to ‘I’ll start it on Monday’ leads to ‘next week’, etc.

If you want to make a change then make a change….NOW. Don’t go waiting until the ‘new year’ or until tomorrow, start now. Procrastination is part of the human condition; we like to put things off if we’re not looking forward to the process of doing them. (Unless of course ‘today’ is 1 January in which case – don’t wait for tomorrow – DO IT NOW!).

If you’re thinking ‘does that mean Mike has no resolutions for this year?’ then the answer is ‘no’. I do have goals for 2016, but they follow all the good goal setting principles and all of them build on things that I’m already working on.

Anyway, enough with my general feelings on why New Year’s is good and bad, this article is to briefly go through what I learnt last year and why Arnold Schwarzneggar and Mark Twain are alike 🙂

The main thing I learnt last year is that hard work and good decision making breed success. I have had a pretty successful year all in all, which is a result of, I believe, working my ass off!

One example of this is my Les Mills teaching, which has seen a paradigm shift over the past 12 months. This is mainly due to me filming at least one of my classes almost every week and critiquing them at stupid o clock at night (pretty much the only time that I have had to fit it in). At the end of each week I’d sit down with my notepad, watch myself and make notes of what I do well and what I need to improve on next time. The results from this for me have been life changing. I’m sure this could be applied to any aspect of life: make time, sit back, reflect and improvements will follow.

I wonder what would happen if we all did this in our own lives, and how much success we could breed as a result?

Although at times the process of this has been hard, at the end i would say I have a better and sturdier support network than 12 months ago. I have made some great friends and have been blown away by some people’s seemingly unshakable faith in me – particularly people I didn’t really know 12 months ago.

I go in to 2016 with a lot of cool things on the horizon, but although the chances I have are a result of hard work, I’m going to need to redouble my efforts to achieve my goals this year. And that’s ok, as I said at the beginning, I believe that hard work and good decision making breed success.

Hopefully I’ll be writing a similar blog post next year.

If you’re reading this and just want to find out why Arnie and Mark Twain are similar, thanks for reading the rest 🙂 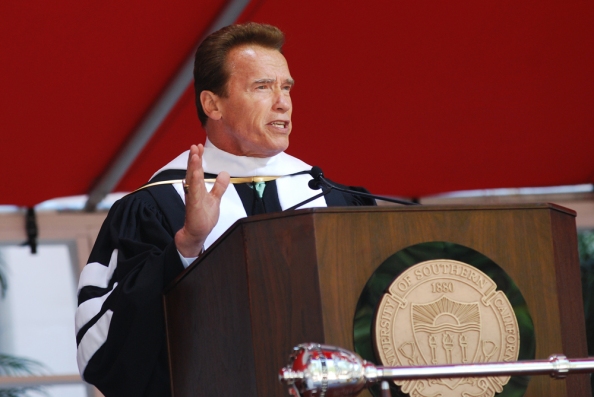 Governor Arnold Schwarzenegger delivers a speech to graduates during Commencement.

Around Easter time 2015 I heard Arnold Schwarzenegger speak at a graduation ceremony and during the speech he cites 6 rules for success:

3: Don’t be afraid of failure

4: Don’t listen to the naysayers

5: Work your butt off

You can see why this resonates with me above and it also reminds me of my favourite passage, by Mark Twain:

‘Twenty years from now you will be more disappointed by the things that you didn’t do than by the ones you did do. So throw off the bowlines. Sail away from the safe harbor. Catch the trade winds in your sails. Explore. Dream. Discover’

So Arnie and Mark Twain, in my eyes, were onto the same idea. I could try to explain further but I think Mark and Arnie have said it as well as anyone could.

Have a great 2016 everyone and remember: